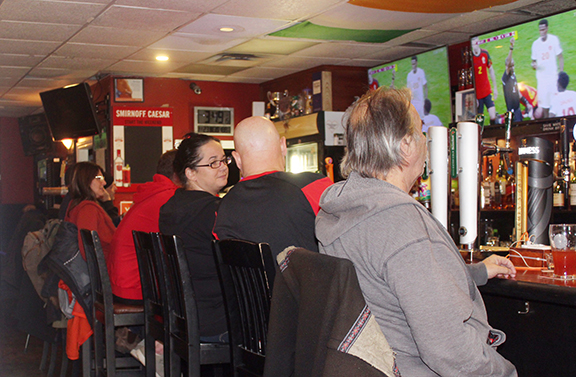 Football fans watch as Canada play Belgium in the World Cup on Wednesday November 23 at the Kilt & Harp Pub on Danforth Avenue. Canada lost 1-0 to Belgium in the game. Photo by Amarachi Amadike.

By AMARACHI AMADIKE, reporter for the Local Journalism Initiative

The bar was filled with ecstatic fans celebrating Canada’s first football game on the largest stage in 36 years.

Bedard said that even if Canada didn’t participate in the competition, he would still watch the games, but it’s a much more enjoyable experience to be able to attend as a fan this time.

“It’s great that they’re here,” said Bedard at half-time as Canada trailed by a single goal.

“Whether they win or not we see a great performance from them and that’s all you want from your team.”

Although the team lost 1-0 after Alphonso Davies missed a penalty, fans remain excited about the future of Canadian football after witnessing a fierce performance.

“I’d be over the moon if we could make the last 16 but the point is they’re playing their hearts out,” Bedard said.

When asked if he had any expectations for the team after the group stage, Bedard simply replied “no”.

Canadian fans may not have high expectations of the team, but that won’t stop them from hitting the Danforth Avenue pub to cheer on their country. Pub owner Mervyn Wallace said people tend to come to his pub to watch games but over the next few weeks Canadian soccer matches are “the best games for the bar”.

He told Beach Metro Community News that he expects his bar to get even busier with passionate fans as the tournament advances to the knockout stages as their teams move closer to glory.

The pub usually looks forward to large tournaments as they attract bigger crowds. Wallace joked that as a bar owner, he always wishes the NBA playoff games went to game seven to maximize profits.

Although FIFA’s game format is very different from that of the NBA, Wallace said he plans to show all World Cup matches and still expects an influx of fans from nations like England, Brazil and Wales even if Canada are eliminated in the group stage .

Until then, he has at least two more highly profitable days planned as Canada take on Croatia on Sunday and Morocco on Thursday 1 December.

He believes Canada will give him business beyond the group stage as he expects wins in the next two games. Like other fans who gathered to celebrate Canada’s return to the World Cup, Wallace saw a lot of potential in the team’s performance against number two Belgium.

“They will do it right if they keep going,” he said.

Did you like this article? Become a supporter of Beach Metro Community News today! For 50 years, we’ve worked hard to be your community’s eyes and ears, informing you of upcoming events and letting you know what and who is making things happen. We cover the big stories as well as the little things that often matter the most. CLICK HERE to support your Beach Metro Community News!